You are here: Home / Table of contents – Synthesise text / Examples of summaries

This is an informative summary from a Wikipedia fragment of text about Johannes Gutenberg, the German who introduced printing to Europe.

A text about Johannes Gutenberg – (194 words)

Johannes Gutenberg (1398 – 1468) was a German goldsmith and publisher who introduced printing to Europe. His introduction of mechanical movable type printing to Europe started the Printing Revolution and is widely regarded as the most important event of the modern period. It played a key role in the scientific revolution and laid the basis for the modern knowledge-based economy and the spread of learning to the masses.

Gutenberg many contributions to printing are: the invention of a process for mass-producing movable type, the use of oil-based ink for printing books, adjustable molds, and the use of a wooden printing press. His truly epochal invention was the combination of these elements into a practical system that allowed the mass production of printed books and was economically viable for printers and readers alike.

In Renaissance Europe, the arrival of mechanical movable type printing introduced the era of mass communication which permanently altered the structure of society. The relatively unrestricted circulation of information—including revolutionary ideas—transcended borders, and captured the masses in the Reformation. The sharp increase in literacy broke the monopoly of the literate elite on education and learning and bolstered the emerging middle class.

The summary of the text (63 words)

The German Johannes Gutenberg introduced printing in Europe. His invention had a decisive contribution in spread of mass-learning and in building the basis of the modern society.

Gutenberg major invention was a practical system permitting the mass production of printed books. The printed books allowed open circulation of information, and prepared the evolution of society from to the contemporary knowledge-based economy.

A descriptive summary of a two minutes video clip from the “Speak easy” series:

A summary of a Speakeasy video (89 words)

The Speakeasy series’ first video is illustrating a very simple truth: if someone cannot communicate effectively, then the person won’t be able to present their own ideas or knowledge to an audience.

Learning communication techniques i.e. using voice, body language, ability to control emotions, rhythm and logic in narration can help any person improve their performance in oral presentations. And the most important idea the clip transmits: anyone motivated, ambitious and practices communication, can learn to better public speakers.

A descriptive summary of the “most powerful love story ever told”, Romeo and Juliet by William Shakespeare, a literary masterpiece:

A summary of William Shakespeare’s play “Romeo and Juliet”

Shakespeare’s play Romeo and Juliet is the world most famous romantic tragedy. In this play, a long lasting dispute between the Montague and Capulet families from the city of Verona causes the death of (Montague) Romeo and of Juliet (a Capulet).

The first half of the play, with jokes and love poetry is more like a comedy: the two teenagers, Romeo and Juliet rush impetuously into love. But conflict, revenge and secret plots create an intense pressure on them and lead the lovers to finally commit suicide in despair.

Shakespeare compresses the action of the play to four days. By condensing the timeframe, he indicates how the speed of events conspires to bring the two lovers to their tragic end. Conflict and implacable fate, the leading themes of the tragedy, anticipate the play conclusion: the death of Romeo and Juliet is a sacrifice bringing the end of the bloody warfare between the two noble families from Verona.

Some trailers of movies after Romeo and Juliet play:

A descriptive summary of 400 words for the fantasy novel “Alice’s Adventures in the Wonderland by Lewis Carroll, a 150 pages book:

A summary of “Alice in the Wonderland”

“Alice’s Adventures in the Wonderland” is a very popular book for children that adults can also enjoy reading. The author is Charles Dodson, an English writer who published the book in 1865 under the pseudonym of Lewis Carroll.

Through its fantasy story and main theme: “a growing girl exploring the wonders of world“, the book has been very influential over the years, both in popular culture and in literature. The book is an enigmatic work, and over the years, readers have been puzzled by the language and the logic of Wonderland.

The protagonist of the book is Alice, a seven years old girl who must find her way in a strange world called “Wonderland”. During her magic journey through Wonderland, Alice encounters peculiar human-like creatures or talking animals: the White Rabbit, the Caterpillar, the Cheshire Cat, the Mad Hatter, and the Dormouse.

The White Rabbit is Alice’s guide and he leads her on many places and adventures through the book. The always hurrying rabbit is a symbol of forever running time.

The smiling Cheshire Cat, who can disappear and reappear, is the only character in the entire novel who listens to Alice. The Cat is giving “advice” to Alice and teaches her the strange rules leading the world she is traveling through.The Cheshire-Cat’s smile is a metaphor of Wonderland’s magic and it is as famous and enigmatic as Mona Lisa’s smile.

Each character teaches Alice something about life and growing up in a hazardous world. Every object or setting in “Alice in the Wonderland” functions as a symbol and often the symbols work together to convey a particular meaning to a scene.

Through an intricate symbolism, Lewis Carroll suggests the complexity of life.This could be the message learned by Alice in her magic, initiatory journey: don’t try to find meaning in all the situations you encounter in the “wonder” world of life, don’t give up and continue your way.

Some trailers of movies after “Alice’s adventures in the wonderland” 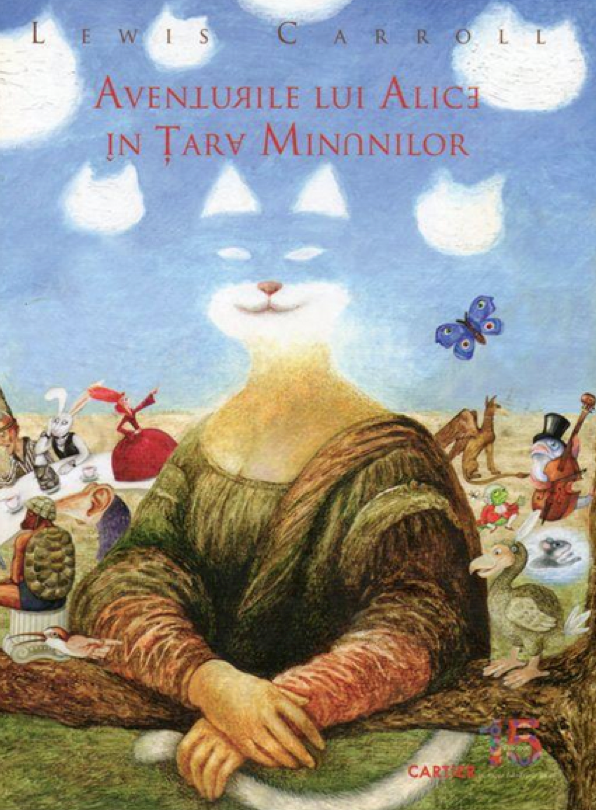 “Alice’s Adventures in the Wonderland” – Cover book by the Romanian painter Violeta Zabulica-Diordiev.